Syncretic Egyptian / Graeco-Roman magic from the collection of texts known as the Papyri Graecae Magicae.
Post Reply
9 posts • Page 1 of 1

In PGM XIII there is a description of a kind of stele to make on natron. It describes an image of the "Nine-formed god", made up of the seven vowels and two "letters" which are the popping noise made by a crocodile bubbling in water and the hissing of a snake. The text says:

have a square of natron on which you will write the Great Name with the seven vowels. Instead of the popping noise and the hissing sound in the Name, draw on the first part of the natron a falcon-faced crocodile and the nine-formed God standing on him

So ... the nine formed god relates to the Heliopolitan Ennead, but my question is - does anyone know where I can see an image of this nine-formed god / Ennead in the form of a single god?

The closest I have found to this description is stelae of Horus the child standing on the back of a crocodile:

Any suggestions would be most appreciated.

According to corpus hermeticum, no. 9 is divine Nous and no. 8 divine logos, so I don't know if that helps.
Enigma et Paradigma
Top

Thanks Talerman that's useful for the deeper meanings of them. The Ennead is made up of nine Egyptian gods, but it seems from the text that there is a god which combines them all. Possibly a Greek innovation.
Top As to depictions of the Enneamorphos, I haven’t seen any. You might want to follow up on the the note in Presendanz to a German article titled Neunheit by H. Bonnet. Also, perhaps consider that a geometric form (enneagram) could be used to represent the totality of the ennead group (as with the planetary vowel triangle). Additionally, look at the depiction of the composite deity in PGM II. 64-183. Those flag poles emerging from his torso are the Egyptian hieroglyph for ntr (‘deity’), he could thus be a singular representation of 5 deities…perhaps the Enneamorphos could have been represented similarly with nine flags.
----------γνῶθι σεαυτόν----------
Top

I'd guess the god Osiris. I've been reading the first volume of Osiris written by Wallis Budge recently. He has has MANY forms. Also, guessing by the imagery depicted on that stelae, that's the Osiris myth.. Again, according to this book (Osiris), Isis went down the Nile looking for Osiris's dismembered body, in a papyrus boat, protecting her from the crocodiles.

According to this book, there were 7 forms (with plate pictures) at Abydos. Osiris also means "many-eyed" in greek.

I haven't read the PGM yet, so I can't say for certain. Anyone's guess is as good as mine.
Top

All of the Gods come from the watery abyss of Nu/Nunet, so you could say that essence of the Nine Gods are mingled together in those waters in their purest state of being.
"...and when the Upper is united to the Lower, then a new Age will
come of Earth, and the Serpent shall be made whole, and the Waters will be as One, when
on high the heavens had not been named."
Top

Thanks all for your replies, they have given me plenty of food for thought.

Leonardo - I like the idea of making it something like the Headless God with the Neter glyphs coming out of his neck, that could look quite striking.

Agnosis - that Osiris image is a good idea too, but I think the detail that is important is that the god is standing on the crocodile's back, rather than protected from it in a boat. It suggests that he has overcome the crocodiles so doesn't need protection from them. He could even be riding on their backs!
Top It is most likely that the imagery of the "nine formed god" referred to in the papyri would not be public knowledge. In terms of the greek mysteries, nine is a number intimately linked to knowledge of the "cosmos". However knowing what this particular "god" represents in this particular papyrus would also be helpful, and if you look at the rest of the passage here, it gives a hint to the context:

The 4 turning points of the year are a reference to the equinox and solstice days. Since the crocodile has a falcon face, he could be referencing Horus as the reborn or victorious Sun, "coming up to breathe from the deep". He goes "pop, pop, pop" and is answered by the nine formed god "antiphonally", or, in a sing-song manner. The nine formed god is linked to the crocodile and stands upon him, and answers when he calls, in a musical way. This could be a reference to many different things. However it may be interesting to note this particular relation of the 3 "pops" to the 9 formed god. In particular:

The Roman scholar Varro (116–27 BC) relates that there are only three Muses: one born from the movement of water, another who makes sound by striking the air, and a third who is embodied only in the human voice. They were called Melete or "Practice", Mneme or "Memory" and Aoide or "Song". Three ancient Muses were also reported in Plutarch's (46–120 AD) Quaestiones Convivales

However, the classical understanding of the Muses tripled their triad and established a set of nine goddesses, who embody the arts and inspire creation with their graces through remembered and improvised song and mime, writing, traditional music, and dance. It was not until Hellenistic times that the following systematic set of functions was assigned to them, and even then there was some variation in both their names and their attributes: Calliope (epic poetry), Clio (history), Euterpe (flutes and lyric poetry), Thalia (comedy and pastoral poetry), Melpomene (tragedy), Terpsichore (dance), Erato (love poetry), Polyhymnia (sacred poetry), Urania (astronomy).

Diodorus also states (Book I.18) that Osiris first recruited the nine Muses, along with the Satyrs, while passing through Ethiopia, before embarking on a tour of all Asia and Europe, teaching the arts of cultivation wherever he went. According to Hesiod's account (c. 600 BC), generally followed by the writers of antiquity, the Nine Muses were the nine daughters of Zeus and Mnemosyne (i. e. "Memory" personified), figuring as personifications of knowledge and the arts, especially literature, dance and music.

This is even more interesting when noting the following:

The Muses were venerated especially in Boeotia, in the Valley of the Muses near Helicon, and in Delphi and the Parnassus, where Apollo became known as Mousagetes ("Muse-leader") after the sites were rededicated to his cult.

Which would indicate another reference to a Sun-god of knowledge akin to Horus. It is also worthwhile to note that the sounds of the "pop" and the "hiss" seem to be referential to a movement of time. In other words, the three "pops" are given at a changing point, and thus a reference to birth or death, a transition - whereas the "hiss" is represented by the Ouroboros, or the snake biting its own tail - which is a reference to eternity, or the endless cycle of life.

However, it seems the most specific reference to the nine formed god is in the following passages, when he is addressed as such:

I call on you, who are greater than all, the creator of all,
you, the self-begotten, who sees all and are not seen.
For you gave Helios the glory and all the power,
Selene [the privilege] to wax and wane and have fixed courses,
yet you took nothing from the earlier born darkness,
but apportioned things so that they should be equal.
For when you appeared,
both order* arose and light appeared.
All things are subject to you, whose true form none of the gods can see;
who change into all forms.
You are invisible, Aion of Aion.

... Through you arose the celestial pole and the earth.

And it is essential to note the following in regards to this passage, which is revealed in the footnotes of the translation:

This invocation and the following (138-53) are essentially identical, both being variations of an old Egyptian hymn in which the rising sun is greeted by the sacred animals, each kind making its appropriate noises. In both invocations the sun god has been made the creator and sustainer of the world, and the songs of the animals are preceded by and partly fused with the songs of the angels, many of whom are Jewish. In both, the same angels and the same languages appear in the same orders. The roles given the god and the angels, and the personnel, help explain the attribution to Moses, the more so because these two invocations are the most important elements in the text - the active agents which make the deity appear.

And then finally we have a few more references to this "god" by other "names" in various animal forms:

In this particular passage, the footnote of the translation is most telling indeed, namely:

*In spite of the claim that this is Hebrew, the first word is a transliteration of the Egyptian word for "I AM" which is "anoch". A similar Hebrew word "anoki" has the same meaning. The author seems to have known Hebrew and Egyptian badly enough to mix them up. See glossary..."

Which brings us "full circle" to the aspect of a god of knowledge, or indeed - "knowing" itself. In other words: gnosis. This invocation above reveals a basis for this text; and shows that it is clearly derived from some school of ancient systemology which blended greek, egyptian, jewish and persian sources of myth and knowledge. This is commonly referred to today as "gnosticism" - although Im sure you are already aware that there were many schools of this kind, and not all of them shared the same ideas. However they did tend to have some basic points in common. In particular, the highest "god" is usually awareness or the "I AM" principal itself - that which orders all things and brings them into being by virtue of its own existence and which is the "self-begotten One". Also the type of external knowledge which seems most venerated in such schools is that which refers to motions of celestial objects and especially the sun and moon, but also astrology in general. This is probably due to the fact that the scientific knowledge resulting from observations of the night sky was one of the first systems of its kind to be passed down through the generations.

Of course there are many other aspects of the number 9 in regards to the greeks, and especially anything derived from pythagoras - and of course by extension: egypt, persia, india, and china. It is a number of completion in regards to the base-10 system, which was symbolized by him in the form of the tetraktys. In other words, nine is the last numerical value, which therefore contains all forms preceding it by means of addition. Its use in regards to constructing visual forms is a cornerstone to understanding many kinds of sacred geometry. This is also why the number nine appears so frequently in other forms of western esotericism such as the freemasons and so forth.

Finally - I thought you might find these images interesting as well, in relation to the stelae above: 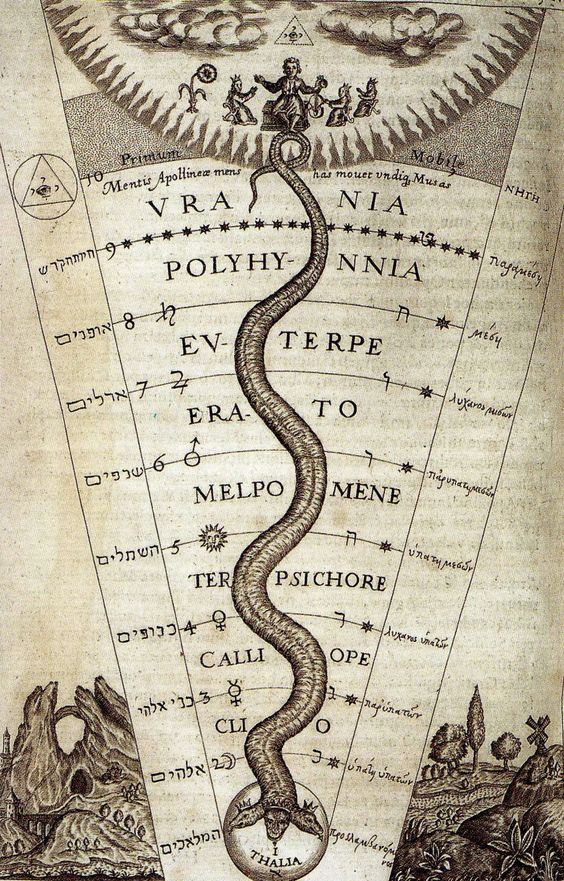