Magic, the connection across cultures

Magic, the connection across cultures

For the past few months, I've been contacted by Odin appearing to shower me with runes and telling me to study them. This wouldn't be the first times I've been told to go to the runes, though. Recently I've been looking around the forum trying to find some information to guide me, and I came across a post that mentioned Wyrd. I remembered I had written this word down along with a few other sentences during my qliphotic rite a few months ago:

"As Gamaliel watched, waiting and plotting,
The doors were made inside me.
Lilith was consumed and I became
Gamaliel. I ate the Qlippoth.

This prompted me to actually research what the relation was to runes, which led me to find the Allrune. 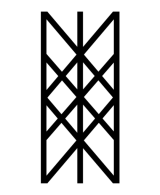 When I saw this, it really sparked my interests for a few reasons. One being because it looks like a gate. Another because it almost resembles this

Where I'm going with this is simply this, that I don't know what this means or where it will ultimately take me but there are no coincidences here, and I should probably start studying the Wyrd. The reason why I haven't is likely due to me getting in the way of myself. I am predominantly of african make-up, but I have irish roots, as well as native roots, and asian. Where I see limitation, instead lies potential. I don't believe it's right to make a blanket statement saying that magic is the thing that connects everything across the globe, because I don't know it to be true in my experience. But if there was something I would say that has fascinated me about magick, is that there is something beyond my grasp... and that makes me want to reach further all the more. Thanks for reading.

Son of the Sun
Top

This topic has 1 reply

Users browsing this forum: No registered users and 12 guests