The Greater Key of Solomon states that this pentacle "serveth to invoke the Spirits of Jupiter, and especially those whose Names are written around the Pentacle, among whom Parasiel is the Lord and Master of Treasures, and teacheth how to become possessor of places wherein they are."

(As an aside, it's worth reading Joseph Peterson's notes on these pentacles. The tl;dr version is that they have been interpolated into the text and are not all from the same source and not necessarily planetary, except the later additions which are based on an Agrippan method for the creation of pentacles. I believe this is one of the later planetary additions.)

There are 4 Angels named in the talisman - NTVNIAL, TZDQIH, DVChIH, and PRSIAL. The potential sources for these names are as follows. I will link directly to Strong's Hebrew Concordance since I'm not sure inserting Hebrew characters will work:

Netoniel -NTNL. Literally, "gift from God" or "given from God".

Tzedeqiah - from TzDQ. Righteousness of God, Or TzDQIH, literally "Yah is righteousness". Tzedek is the name given to the sphere of Jupiter.

Parasiel - from PRSh, to separate, to make distinct, to distinguish.

The sense of this talisman is therefore something like "righteousness, gifted from god, made distinct by purification". This is the treasure that Parasiel teaches you to become possessor of.

I suspect the figures attached to the 8 spokes are made by joining the dots in the geomantic figures of Acquisitio and Laetitia both of which are associated with Jupiter.

Alot of the later planetary pentacles seem to work in a simnilar fashion. One of the most amusing is the second pentacle of Mercury which is "to bring to effect and to grant things which are contrary unto the order of Nature; and which are not contained under any other head" and contains the name Baal and what I believe should read Ba'al Zebub across the centre. The message seems to be that if Yah will not give you somnethibg, better ask the other guy. 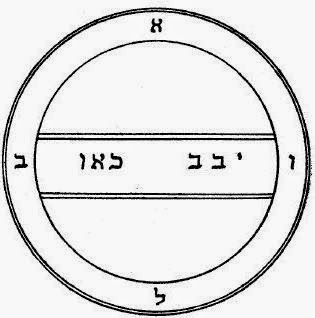 I would be interested in alternate explanations for the names (perhaps if Raum is still around?).